Alternate World Forms:  Several alternatives to the traditional spherical world form are possible. Most occur when a civilization wishes to trap and use energy from its central star, and needs great land surface to do so.  In addition, population pressure (especially on a civilization unable to develop interstellar travel on a large scale) may be a contributing factor.  Alternate world forms are not included in the world creation sequence, but may be provided on a sparing basis by the referee.  They are ideal for large population worlds, but may also be populated by smaller numbers, as in degenerate or decimated worlds.

Worlds and Adventures, pp. 8-9
Traveller, 1977 Edition
The above paragraph is an example of something found in the 1977 edition that doesn't show up in the later, revised edition of the game.  The different kinds of alternative world form were mentioned, but the rationale for including them was not.  This may seem like a minor editorial decision, but it indicates in a subtle way how much more open the 1977 edition was to different ideas and ways of doing things. 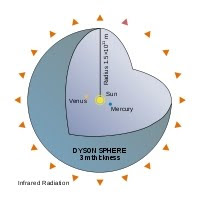 Not unlike the idea of a "Saturday Night Special" from Empire of the Petal Throne, alternate world forms were intended to be rare.  Not too surprisingly, such "rarities" became significant points of interest in campaigns developed and played in the Twin Cities in 1977 onwards.   A Dyson Sphere (see left) was part of several adventures in several campaigns.
Another interesting omission from the later editions of the game was the Jump Route Determination Table.  This table existed to help the referee map out "the charted space lanes, which mark the regular routes travelled by commercial starships."  It might be possible to think of the resulting "space lanes" as corridors connecting the different "rooms" as represented by the star systems - I don't want to overextend the dungeon metaphor, but it was the prevalent way of thinking back in the mid-70's.  The 1982 edition included a much more vague section, sans table, which assumed that the referee had already figured out the larger political picture.  Again, perhaps a subtle distinction, but one which I believe reflects changes in thinking between 1977  and 1982.  I recall there being some debate about the utility of the table at the time, but looking at it now, it provides a straightforward way of determining a lot about the relationships between star systems without making assumptions about a larger "Imperium."  In a fairly real way, a thoughtful referee could randomly generate a sub-sector or two, and then figure out what the larger interstellar community looked like.
Something missing from the 1977 edition is the concept of "travel zones" - the now-familiar Amber and Red Zones.  I was surprised by this - I could've sworn they were there, but they apparently were added in either the first issue of the Journal of the Travellers Aid Society or possibly Adventure 1: The Kinunir.  I remember that there were other in-game systems for dealing with "restricted worlds" but I don't recall any specifics - save that there were usually well-armed interdiction satellites that referees would put in place to deter trespassing player-characters.  It would be interesting to come up with an alternative interdiction system, but I must admit that the entire idea of Amber and Red Zones is now a part of what I think of as "Traveller" so I suspect I will continue to use them.
It's difficult to convey just how much of a difference these seemingly minor subtractions and additions actually made in world creation, but it was significant.  It also shows how the various assumptions and details of the GDW-in-house campaign, the Third Imperium, emerged rather slowly, allowing for nearly two years of campaign play in a myriad different universes.