The Bag of (Sometimes) Holding

Writing up new magic items is fun; using them is a completely different story.  This one came out of a whimsical conversation with my significant others: 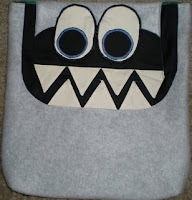 The Bag of (Sometimes) Holding:  This magical item appears identical to the usual Bag of Holding.  However, it's qualities are somewhat different - while it can hold at least as much as a Bag of Holding (it is apparently possible to put in even more), the Bag of (Sometimes) Holding is uncertain in its ability to keep everything inside.  Rather than rupturing, however, the Bag will simply open and the contents will erupt into whatever area the owner of the Bag is currently occupying.  Why this happens is unclear, though some careful research would reveal that items placed willy-nilly into the Bag, or overloading the Bag, tend to exacerbate the problem.  Referees should determine a percentage chance of the Bag letting loose, based on the quantity and variety of what's inside.  Then roll 1d12 to see how many turns before the eruption takes place.  In the meantime, you may wish to provide clue of the upcoming event.

For referees: the Bag may be played as a straight-up magic item of uncertain character, but it is suggested that you allow the bag to demonstrate signs of "indigestion" - occasional loud burps, the exterior of the Bag churning every now and again, minor rumbling sounds from within.  For full effect, you can have the Bag emit a contented belch after disgorging its contents, followed by a slight sigh.  Everything inside should be perfectly fine and unhurt.  Do not let player characters use rope or other means of attempting to keep gear separated within the bag - imagine what it might feel like to the Bag!
Posted by Victor Raymond at 2:16 PM No comments:

So I'm not able to attend Geek.kon 2011, which is something of a shame, but I am also pleased to report that my colleague Nix will be running some events there.  However, I will be at the Fall Gaming Hoopla in Janesville, on September 23rd-25th, running the following games:


RUNNING OUT OF AIR
SATURDAY, 10 am - 2 pm
You're on a lifeboat.  The ship you were on was shot up by pirates.  They seemed to come out of nowhere; was it an inside job?  Worse, you've just discovered you are venting atmosphere, there's no sign of rescue, and the nearest planet is across the star system.  Can you survive?  (Classic Traveller rules)
A VOICE IN THE WILDERNESS
SATURDAY, 2 pm - 6 pm
Traveling with a merchant caravan in a faraway mountain kingdom, you hear rumors of a new discovery in a high mountain fastness, of strange items of the Ancients, gold coins with the faces of long-dead kings, and voices in the darkness.  But there are also legends of terrible guardians who can slay with a single strike; remember the old saying: "Sweet is the harbor - but Death is the ferryman." (Empire of the Petal Throne rules)
BACK INTO THE DUNGEON!
SUNDAY, 10 am - 4 pm
Grab that 10 foot pole and 50 feet of rope!  Have you got your weapons and armor?  Do you know where your spellbook is?  It's time to go back into the depths of the dungeon, kill things, and take their stuff.  This is a classic "dungeon crawl" using the Original D&D rules.
Posted by Victor Raymond at 11:49 AM No comments:

Leaving a Sense of Mystery...

One of the aspects of adventure gaming that I really enjoy is the sense of exploration and sometimes revelation you get when you discover something neat about the background setting.  It's probably one of the reasons I have been so deeply immersed in Tekumel, a world so complex and detailed that it is "...a riddle wrapped in a mystery inside an enigma: but perhaps there is a key."  (Okay, so this might also explain my fascination with Russia, but I maintain that's separate.)
I've been having fun with this as I've been working through a guide to Empire of the Petal Throne, over on the ODD74 Discussion Board.  But in the midst of all of this, I've been struck at how much some gamers want definitive answers to How Things Work.  I know I've shied away from this kind of thinking, as it often seems like a precursor to certain kinds of min-maxing and meta-gaming.  Yet I also understand how much it matters - that sense of discovery.  So there's a tension there.  From a refereeing perspective, how much do you reveal, and when? weighed against how many plot coupons do your players have to turn in to get to the end of the quest, right?
One aspect of Prof. Barker's genius in his creation of Tekumel is just how multi-layered the "truth" actually is, how much an answer to one mystery immediately begets another puzzle.  I know it drives some players nuts, but it's something I actually look for in a game - a world so intriguing that there is always something more, something unknown.  I don't pretend to have an answer (that would subvert the entire point of this post, right?), but I do think that the search for the "truth" is chimerical at best - I mean, what would you do if you discovered it all?
Posted by Victor Raymond at 7:26 PM 1 comment:

The Seal Emperor wants YOU!

I'm getting into the groove of making Tekumel better known.  I'm interested in doing something with ConstantCon 2011 - more details on that as it develops.  There is more room in my text-based game, which I am just re-starting on the ODD74 Discussion Board.  Drop me a note if you might be interested in either of these.
Posted by Victor Raymond at 6:27 PM 2 comments:

An Appeal to the Internet Fount of Wisdom

Back in the late '70's and into the '80's there was a series of D&D ads that appeared in comic books and elsewhere.  I never paid much attention to them, but I know they were part of what got people into the hobby.  Now, however, I find myself curious about the ads and the characters depicted - for some reason, I associated them with Holmes and possibly Moldvay Basic - but I've been unable to find them on a quick Google-search, which is frustrating.  I know about the ads with Grimblade, Saren, Indel and Valerius, but I clearly remember a different set of characters in a different set of ads.  Can the internet Fount of Wisdom help me out here?
Posted by Victor Raymond at 8:03 AM 4 comments:

An embarrassment of riches 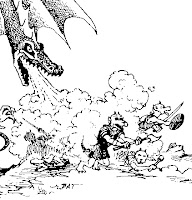 Between now and the end of the year, I have the following opportunities to introduce Old School Goodness to people - just in Wiscowsin or nearby:

And that's not counting the monthly Madison Traditional Gaming get-togethers on the 3rd Saturday of each month.  I think I ought to take it easy on myself when putting together the one-shot adventures for these cons - it's going to get busy!

You CAN run Empire of the Petal Throne!

I've started a fairly in-depth analysis of how to approach running Tekumel, using the original Empire of the Petal Throne rules.  It's over on the OD&D Discussion Board.  The idea to do this was originally thought of back at GaryCon in March, and recent discussions about Tekumel have simply added to my desire to write some of this down for people.  I'm also attempting to apply some of the principles in my own game here in Madison.

I'm working on the Tips for Beginning Referees; I'd like to have that as a download to share with people when it is done.  Comments on that or running EPT are always welcome!
Posted by Victor Raymond at 10:55 PM No comments: