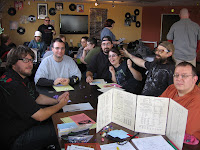 Madison Games Day 2 was a success for TARGA events.

Some logistics to churn: The total turn-out for this one-day free game-a-thon was somewhere around 40-50 people, with no pre-registration and a request from the event organizers asking for referees to submit events. Event listings were just one-line announcements (see blog), so it was a free-for-all to attract players.

Chad Thorson and myself showed up at Noon, and right away appropriated a table. We began generating characters for an OD&D session using Labyrinth Lord, with a quick dive into Under Xylarthen's Tower. At first it was just Chad and one other player, but we soon acquired several more players.  I had initially generated a couple of henchmen - 1st level fighters named Fred and Charley - but with the addition of two more players to round out the party to six, they were ready to go into the dungeon.  Coming down the narrow stairs, they moved straight ahead and were about to enter a room when a couple of fire beetles came on them from behind.  But they were satisfactorily dispatched, and their gooey glowing bits used for lighting, rather than the oil lantern wielded by Alvin the Magnificent.  The next two encounters were with a giant snake and then two giant weasels.  In both cases, magic-users stated they were going to cast spells (Sleep and Web, respectively), but the rest of the party went charging in, resulting in some sleepy comrades, and then some glued to the floor party members.  The party then avoided a nasty undead, and found a shaft leading to the 4th level and a bunch of white apes.  The cleric in the party attempted a Speak With Animals, and the conversation with the two apes went something like this: 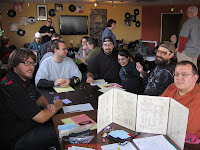 (Cleric to his compatriots: "well, that sounds sorta friendly..."  Compatriots:  "What sort of 'lunch' do they mean?")

Cleric:  "What will we have for lunch?"

And it went downhill from there....well, it descended into a melee, with the apes knocking down two party members.  I had to invoke the -10 HP rule, though I probably ought to have been more hard-hearted and simply let the apes kill the two characters.  However, about it was about three hours in, so we ended the session after dispatching the white apes, and the acquisition of a magic sword. 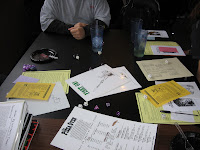 After a break for pizza, we resumed with the same group of players for a session of Empire of the Petal Throne. The Band of Heroes was sent off to discover more about ancient devices under Fort Pu'er and ended up on a Tubeway Car jaunt across Tekumel. Ice temples, Ssu, and King Griggatsetsa were all encountered, before ending up in Avanthar.

Things broke up around 9pm, as the organizers shut things down about then.

1) Having a referee and at least one player makes recruiting more players easier. Having Chad ready to play broke the ice for the rest of the players, so I was really happy we had coordinated things.

2) Running several different games is more work than it might seem. I had originally planned on running Classic Traveller in addition to OD&D and EPT, and I ended up with four book bags of gaming material - all of which were heavy. It would've been much easier to run the same game three times and leave the other stuff at home.

3) Having flyers and swag to hand out is a Good Thing. I had a table display and a bunch of flyers, several copies of Microlite 74 v.1.1 in booklet form as swag, and One Page Old School Primers. They ate it up.  The next Madison Games Day 2 will be sometime in January; we might have two sets of events to run there.

Here's hoping you roll a "20" on your next saving throw!
Posted by Victor Raymond at 7:42 PM 2 comments: 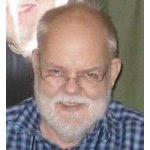 It was Dave Arneson's birthday about a week ago.  Unfortunately, Dave wasn't here to celebrate it; he passed away earlier this year.  In the midst of everything else, I took a moment to think about Dave and what he brought into the world with his marvelous creation of fantasy role-playing.  It reminded me that I had done the right thing six months ago.

One of the more difficult things to admit as a referee is when you make a mistake.  We like to think that mistakes are mostly of the "oops, didn't quite mean it that way" variety, but sometimes mistakes can be much bigger than that.

Probably my earliest big mistake came when I was running a Chivalry & Sorcery adventure for a bunch of players at my local game club.  They had encountered a barrow wight, and I ran through the entire encounter without taking into account the serious "fear" ability that the undead creature had.  The party went away with a bunch of loot, and I felt bad about it.  So when I went back to read up for the next adventure, I came across the rule about inflicting fear - and decided to re-run the entire encounter at the next club meeting.  There were howls of protest, but some of them actually went along with it.  Looking back on it 30 years later, I still recall this as a moment that I'm not at all proud of.  Re-running an encounter?  My older self says, "suck it up and learn from it for next time."

Somewhat more recently, I ran a D&D 3rd Edition campaign, with players who were...casual, shall we say, about in-game consequences of their actions.  It all came to a head when the paladin in the party started to bargain with the rogue in the party about how to quietly steal from (and possibly murder) a third player-character.  The player of the paladin seemed shocked that her deity just might have ideas about such dishonorable and ignoble behavior - and the rest of the party seemed as shocked as she was.  That group fell apart for that reason, amongst others.  It made me think carefully before starting a long-term campaign with people whose gaming style I was unfamiliar with.

Not that long ago, I ended up running an espionage game that was supposed to transition into an Infinite Worlds campaign.  We had all gone to see The Bourne Identity, and my players were really pumped up about running spies and doing covert operations.  What I hadn't counted on was the complete disinterest on the part of the players to do any real world research about the organizations their characters worked for (CIA, MI5, the Mossad, etc.).  The mistake I made was then in providing them with NPCs who would feed them information.  Then practically every adventure session started with, "I call home; what do I find out?"

I'd love to be able to say that I've learned enough from all of these experiences (and many others) to have a coherent idea of What It All Means, and How To Improve Your Game in Three Easy Lessons, but it would not be true.  The reality is that I find myself having learned from some of these mistakes and doing a bit better - but that's about it.  Since I just moved, I don't have a regular gaming group right now, so I know I'm a little rusty....

...which means I'm likely to make a mistake or two in the future.  Here's to not rolling a 1 on my next saving throw!
Posted by Victor Raymond at 10:50 PM 4 comments: