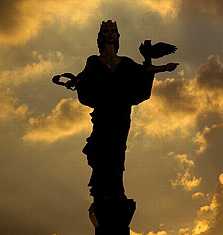 "Rise, Farashu, and hear the edict of the Ever-Lasting Guardian of the Gods.  Whereas you are said to be the last survivor of the Legion of the Sun-Bright Disk, and whereas that legion was known to all to have died to the last soldier in Katalal in the terrible War of 2020 A.S., and whereas you have but lately become known to the Temple of Thumis on our city of Bey Su, apparently having traversed through both time and space....Here is the Divine Will revealed!

"Go forth, in the name of the Emperor, Hirkane Tlakotani, and be mighty!"

...or so the adventure began.

Shortly after this, on a caravanserai platform near the Sakbe Road between Bey Su and Hauma, the party of adventurers bedded down for the evening, slightly apart from the caravan with whom they were traveling.  Inside a large pavilion, the humans settled down in various spaces appropriate to their statuses.  As night progressed, black-clad assassins of the Black Y Society made their way past the Shen guard, and into the tent where Farashu and his companions lay asleep.

Yes, there was a fight - no real surprise, right?  The assassins misjudged Farashu's companions, and after they failed in their apparent attempt to kill him, they made their escape.  But that is where things went downhill, quite literally.  Despite a lack of coordinated response, despite knowing that there were several assassins involved, and despite not knowing what the lay of the land was around the caravanserai....Farashu charged out after the assassins, waving his sword, calling out, "To me!"  He jumped off the platform and ran into the surrounding darkness.

The assassins must have felt victory being snatched from the jaws of defeat.  Farashu did not even realize what had hit him when the assassins struck again, leaving only his steel sword for his companions to find later.  Two other assassins fought a rear-guard action against the Shen warrior who had attempted to rescue Farashu, neatly dispatching him with a lucky blow.  The party returned to Bey Su, using Farashu's steel sword to finance the spell of Revivification for the unlucky Shen.  Poor Farashu was missing and presumed dead - his body was never found.

Moral of the story:  You can set up the conditions for a marvelous adventure, but never underestimate the power of player-characters to go off and do something truly stupendously nutbar in character.
Posted by Victor Raymond at 2:08 AM 1 comment:

James Maliszewski and I were talking the other night about the practice of naming campaigns.  I got my start in gaming back in 1975, and after reading The Strategic Review, it was pretty clear to me that naming your campaign was a way to signify that it was your own interpretation of the game.  This wasn't just a matter of coming up with your own dungeon (or "mega-dungeon" in current parlance), but also - as James and I discussed - an opportunity to come up with your own rules and rules interpretations.  At the time, it meant that each campaign was different, and going from campaign to campaign meant that you needed to check in with the referee about how things worked.  It led to some interesting discussions about how people thought about D&D, as well as a lot of arguments about what was "fair," etc.

Over time, particularly after the emergence of AD&D, there was a shift towards "by-the-book" game-play.  It seems to me that what this led to was the notion that "different" was bad, whereas during the early era of role-playing (roughly 1974-77), "different" meant "interesting" - the value judgment would come after you played in someone else's campaign, as you decided if it was to your own taste or not.
Posted by Victor Raymond at 10:04 AM 1 comment: