When I first started playing D&D, back in 1975 or so, I was just a teenager. I played mostly with my high school friends, but after awhile I wanted to see how other people played.  So even though I was in high school, I discovered the Conflict Simulation Association at the University of Minnesota - and an undergraduate majoring in Medieval Studies named Michael Mornard.

Michael's D&D campaign was set in Merry Old England during the reign of Edward III.  Sherwood Forest had a deep dark secret, with the Devil running the show (if I recall correctly).  I learned the old English monetary system (12 pence to the shilling, 20 shillings to the pound, and 21 for a guinea), and what you needed to do between dungeon expeditions (repair your armor).  There was one particular adventure where my hobbit thief ended up in the back rank, so I carefully reached over and turned him around so he could see if anybody was sneaking up on the party, while the front rank was puzzling over a door.  "That's 50 experience points, right there," Michael declared.

Gaming with Michael was often like attending the School of Hard Knocks.  At the same time, it was always fun and definitely something that grabbed my attention.  In many ways, my style of gaming over time has been shaped in part by Michael's tutelage.

More recently, Michael moved to New York with his wife, Jean.  Jean is at seminary, studying to be a priest, so Michael has been avoiding his own seminary studies having fun playing and running D&D for some of the New York Red Box crowd, including Tavis Allison among others.  So it was with a real sense of nostalgia and interest I recently read "Gaming with one of the original D&D players" over on Blog of Holding. Go check it out - Michael's in fine form, reminding us that "The cool thing about your character was what you did in the game." Right on. Preach it.
Posted by Victor Raymond at 11:10 PM No comments:

The attached picture is a preview of a new release coming VERY soon from Prof. Barker and the Tekumel Foundation. It will be available through DriveThru/RPG Now. Details to follow soon! 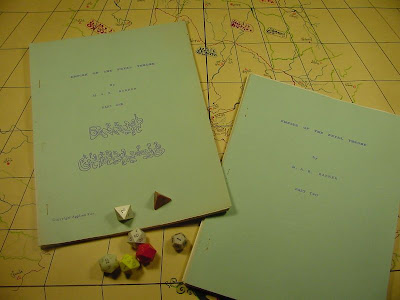