It's a safe assumption that most gamers have heard of Wil Wheaton - you know, Wesley Crusher on Star Trek: The Next Generation? And you might have heard that he's been running a D&D game, yes?

In the crush of end-of-semester grading, combined with the passing of Dave Arneson, I managed to miss this (see right): Wil's design for a t-shirt, available through shirt.woot. Now I'm not much for t-shirts anymore, ever since I stopped running science fiction conventions, but this one grabbed my attention.

Imagine my disappointment when Wil found out that it was no longer available. I know the internet has an attention span of a gerbil hopped up on caffeine (or cocaine), but this is just plain silly. I'd be overjoyed if the shirt became available again - if you agree with me, let Wil know!
Posted by Victor Raymond at 9:27 AM 3 comments:

When I was much younger (like in my teens), I was an avid wargamer and role-player. One of the things that made this much easier for me was the existence of three different gaming clubs: the Conflict Simulation Association (CSA), the Fantasy Role-Playing Game Association (FRPGA - pronounced "ferp-gah"), and the 6th Precinct Wargaming Club.
So now I've come to discover that both the CSA and FRPGA are no longer to be found at the University of Minnesota. The 6th Precinct was eliminated long ago in city budget cuts. While it is the case that the Guild of Wargamers and Roleplayers is alive and well at my new alma mater, Iowa State University, I began wondering if gaming clubs are still viable as places to find like-minded gamers. It paralleled the dismal news frequently heard about the disappearance of the Friendly Local Game Shop (FLGS). It's not that hard to form a student group or a club - it seems to me that there ought to be opportunities to do this - is it just that people don't think this way anymore about gaming as a social activity?

Fortunately, a review of the list of student organizations at the University of Minnesota revealed several successors to my old favorites. The Campus Crusade for Cthulhu, the Campus Wargamers, and the Society for the History of Naval Warfare all seem to be carrying the flag for gaming on campus. Even so, there doesn't seem to be a club for tabletop role-playing games (as we now refer to them) - room for growth, methinks!

Posted by Victor Raymond at 10:58 PM No comments: 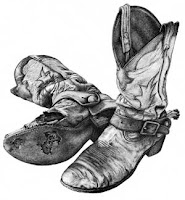 Having just gotten back from Dave Arneson's visitation and funeral, I hope you will forgive me if my mind wanders just a little. It was a decent funeral, and I was glad for having Michael and Jean Mornard there, as well as connecting with all sorts of old friends and making a few new ones.

I started to think about how we honor our fallen, and then that got me thinking about dead PCs in role-playing games (I warned you my mind was wandering). I mean, in Boot Hill, fallen gunslingers have a place and even a little ritual to go along with the exchange of lead in the middle of the street. But what about in D&D? Did or does your party have ways to deal with their dead? Maybe it is just me, but I have a hard time remembering any sort of ritual or practice of giving the dead a decent burial ("Out of the boat/And into the dark/Goodbye, Jenkins/Hello, shark"), except perhaps after they had achieved some sort of rank or recognition - and maybe this lacunae says something about the games I have played in.

How do you honor your slain party-members? ("Looting the body" is not quite what I was thinking of, okay?)
Posted by Victor Raymond at 4:35 PM 2 comments: 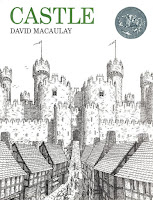 Castleby David Macaulay is supposedly for kids - but pretty much every gamer of any age I have ever known has a copy on their shelves. It's a grand book full of marvelous illustrations, and what it does best is explain how and why castles were built the way they were. From the perspective of gamers and gaming, this book is a treasure trove of little design details that can be added to castles and dungeons and fortifications, to add background detail and a few little mysteries, e.g. why are there holes tracing a shallow angle along the castle wall? To provide anchor points for posts for a ramp to transport rocks.

There's a larger question of why would castles in a fantasy setting with flying monsters and destructive magic be built in any way similar to that of our ordinary Middle Ages. It's up to the referee to determine the answer to that question. If you want a decent base to work from in castle design, however, this is a good book. You can get it here.
Posted by Victor Raymond at 9:59 PM 3 comments:

I'm currently in Madison, Wisconsin for the weekend, and am getting ready to go to Minneapolis-St. Paul for Dave Arneson's memorial on Monday. It's pretty obvious to me now that Dave's passing had a much bigger effect on me than I was initially willing to admit. That having been said, there have been a few gaming-related ideas chasing through my mind. In no particular order:
...and then there's more besides all of that.
Posted by Victor Raymond at 12:31 AM 3 comments:

There's a side of world-building that comes up whenever you have clerics - so what sorts of holidays does their religion actually have? If you go about it fairly blithely, you end up with something that looks like a mix between the medieval Catholic list of Saints' days and the solstice/equinox set-up from modern paganism. And as far as it goes, that's not bad - familiar without being too familiar. But it also has a "been there, done that" feel to it for me.

What holidays represent in game terms are a tension between referee and player creativity, or so it seems to me. Because holidays represent significant moments in time, it is very easy for referees to engage in some deep world-building regarding them - but that's not necessarily a good thing. If you build a deeply detailed religion with holidays, tenets and doctrine, you have to work to provide players with a means of adding to them or in some way creatively engaging with what you've presented. By contrast, one of the things that I actually like about OD&D's Gods, Demi-Gods and Heroes is how unfinished it is - you get stats on the deities, some information on the pantheon of which they are a member, and sometimes a little about their followers and worship. There's a lot of room for a referee and players to work in developing something for their own game. Each version of this that has followed - Deities and Demi-Gods, Legends and Lore, etc., have gotten more and more detailed about the religions. Unfortunately, that means that - like with stat blocks for monsters - it's easy to get buried under "doctrine" and "structure of belief." It's a lot of "rich background detail" - but how much do you or your players really want?

I used to want a LOT of background detail; even today, what I consider a bare-bones outline is more than some referees are probably willing to do. But now I find myself wanting to leave the background a little more mysterious - open to being left undefined or created out of game-play. So when it comes to holidays (and in-game religion), I'm come full-circle from when I was much younger - I'm willing to do some work, but I think I'd rather let a player playing a cleric help me figure out when they are. It'll be more fun that way.
Posted by Victor Raymond at 6:40 PM No comments:

I was asked on another forum to provide some thoughts about Dave Arneson and his participation in Prof. M.A.R. Barker's world of Tekumel. I've decided to share those here, as well:

Dave played irregularly with the Thursday Night Group, sometimes for a longer stretch when he lived in the Twin Cities, then for the occasional visit when he was in the Bay Area or Florida. Dave's primary character, Captain Harchar, was clearly one of those "original EPT" characters in Tekumel. Harchar was a weird mix of "D&D character" and "upstanding member of the Blazoned Sail clan." I suspect some of this was due to Prof. Barker always keeping in mind that it was Dave at the gaming table, but Dave managed to always act in a "proper Tekumelani" fashion while making it very clear that ol' Harchar was in it for himself and the gold and nobody else, in about that order. Harchar always had two assistants/bodyguards/helpers with him, Swordslinger and Staffswinger - those were nicknames, but the NPCs were tough and made sure Harchar was unmolested. You might think that Prof. Barker was providing a kind of special assistance to Dave, but such was not the case.

Harchar repeatedly got himself into and out of rather sticky and/or tough situations - up to and including getting his ship transported from the Chanayaga Deeps to Lake Parunal, where the locals had never seen anything larger than their fishing boats and small single-rower galleys before. He set himself up as the incoming governor of Mihallu, and had everybody convinced of this fact, and the actual ruling clique in Ninue ended up working feverishly to discredit him (they eventually succeeded before he reached Mihallu - read some of the related story in Prof. Barker's novel Flamesong). Eventually Harchar and his ship were returned to the waters off the city of Jakalla.

Dave was also responsible for some of the development of the concept known as the "Tree of Time" in Tekumel, wherein all of the different strands of possibility were represented in a kind of metaphysical conceptualization as a ever-branching (and reconnecting) set of tree branches. He was playing a different character, but I recall quite distinctly how we ended up traversing
the Many Planes looking for things, and Dave's character (not Harchar this time) finding evidence that signified to him how the Tree was manifest, operated, etc. - it became a kind of religious revelation that Dave's character shared with others - usually to Dave's advantage.
Posted by Victor Raymond at 8:20 AM No comments:

As has been reported by many sources, Dave Arneson has passed away. It's been just over a month since the anniversary of Gary's death, and now both of them are no longer with us. I hope people will take the time to appreciate these two men, who changed the world with their modest creation. Whether that is through gaming, or raising a toast, or a simple prayer, they deserve to be honored in our memories.
Posted by Victor Raymond at 7:54 AM No comments:

For those of you who do not know, Dave Arneson is in hospice, dealing with late-stage cancer. I've known Dave now for many years - not as close as some, but we're friends. I also happen to know Michael Mornard ("Old Geezer" on many forums), and a couple of weeks ago, I had the chance to get the two of them together for the first time in many years. We sat in the dining room of the home of Malia, Dave's daughter, and talked and reminisced for a couple of hours - rather, I listened as the two of them went over fond memories of days past, and compared notes about the present day. They both were very happy to have the chance to see one another, and what with the current news about Dave's condition, I am glad I did it.
Posted by Victor Raymond at 2:41 PM 1 comment: