Off to Texas - Part Two 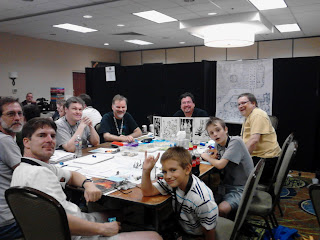 North Texas RPG Con has been a blast so far.  I arrived Thursday evening to find Tavis Allison and Nick Mizer in the hotel bar, and we spent several hours talking about academics and gaming.  Friday, I had a chance to run the Jakallan Underworld for two intrepid players, Ian and Duke.  Taking two characters each, they managed to get close to the Temple of Vimuhla's fiery lava moat - only to have two characters slip and fall to an incandescent doom while trying to cross the high, narrow bridge.  The two remaining characters beat a hasty retreat, eventually escaping, but only after losing a Plaque of Ruling the Ru'un to a Priest of Wuru.

Saturday was spent in more conversation and catching up with people, including Allan Grohe, Michael Curtis, Jeff Dee, and many others.  By Saturday evening, I was able to gird myself for running another adventure in the Jakallan Underworld.  Shawn, Kenny, Tyler, Lew, Marshall, Jeff and Chris were the intrepid band who ventured forth (clockwise from myself, above) - Jeff being Jeff Dee, and Chris being Chris Holmes, the son of John Eric Holmes of Holmes D&D fame.  Their party made their way into the Underworld, encountering a ruined temple of Lord Sarku in the depths.  There they defeated a number of zombie-like Mrur, many of the rat-like Kurgha, and then ended up in a stalemate with two Pygmy Folk.  The Pygmy Folk used two Eyes to first Slow the party, and then produce nearly a score of armed and armored automata to menace the party.  Only the quick thinking of Jeff Dee and the casting of a Shield of Defense spell prevented a TPK.  However, by the time the metal monsters disappeared and the spell wore off, the Pygmy Folk were long gone.  They party decided that discretion was the better part of valor, and made their way back out of the Underworld.  Their last encounter was with handful of initially bemused Thunru'u, whom they distracted as they raced past.  The Thunru'u attempted to stop them, and were rewarded with fiery death from an Eye for their efforts.

The party escaped with only 66 Kaitars in loot, which they promptly had to hand over as part of a bribe to the City Guard, who were waiting when then emerged above ground.  However, avoiding near-certain death was itself a reward, and the adventure ended there.
Posted by Victor Raymond at 10:21 AM 6 comments:

Off to Texas - Part One

Chris Davis of Blue Room fame was kind enough to offer me some crash space at his place, since St. Louis was a decent seven hours from Madison, Wisconsin.  Arriving late on Saturday, we went out for a late night meal and some discussion about the Tekumel game we were hosting the next day.  Over pancakes and sausage, we "did sums" and came up with about a half-dozen likely players who had let him know of their interest in playing.

The next morning, we got our stuff together and went off to the Fantasy Shop on the south side of St. Louis.  Store manager Josh was a fine host, and soon players arrived: Tom and Karin, Matt Fischer, Jeff as well as Chris and myself.  They had a grand time venturing into the depths of the Jakallan Underworld, eventually finding a small shrine to Ksarul guarded by a dozen Shedra.  It was Matt's character that was done in by the Shedra, which was fitting since he was an adherent of the Doomed Prince himself.  The rest of the party survived just barely, and made their way back to the surface.  We ended the game, and Josh helped out by taking pictures of everyone using Matt's camera.  (Hey, Matt!  Can we see them sometime...?)

Saying goodbye to Josh, and joined by latecomers Adam and Amy, we all went next door to the Shogun Japanese Steakhouse, and had a great meal with lots of knives flying in artistic patterns.  We ended the evening playing more Tekumel at Chris' house, and talked into the wee hours of the morning about gaming, gaming history, and what made Old School gaming so special.

NEXT: Driving to Dallas-Fort Worth!
Posted by Victor Raymond at 11:22 PM No comments: