"He's almost dead!"  (i.e. a PC is somewhere between 0 and -something hit points)
"Quick, bind his wounds!"  (i.e. what you do when you have no cleric in the party) 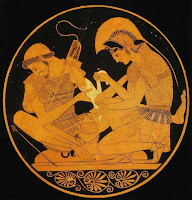 One of the things I've done in Aldwyr has been to allow for "binding wounds" - this involves post-combat action to bind up physical wounds so that someone does not bleed to death.  I've done this several different ways in the past, including 1d4 and 1d3 hit points regained.  But for some time now, I've been using 1d4-1, giving a range from 0-3.  Binding wounds prevents a character below zero hit points from getting any worse, but it might not result in them regaining consciousness.  I understand that Swords & Wizardry White Box has a similar "Binding of Wounds" rule.  I used to think there was a rule in either OD&D or AD&D that was the original inspiration.  There apparently isn't such a rule, which only served to underscore my deepening unease about this practice.

D&D is supposed to be deadly.  Yet, rules such as "poisons do damage, rather than just kill" and "you can bind someone's wounds" and "zero hit points isn't dead, -9 or -10 is dead" make for a less deadly game.  Indeed, I wonder to what extent they subtly encourage players to get overly invested in their characters.  One could argue that there ought to be really deadly poisons, and really massive amounts of damage, just to counter-balance this trend.  But the "escalation of power" doesn't always make for a better game.

I'm still thinking about this.
Posted by Victor Raymond at 10:26 PM 6 comments: