I hate gaming at home 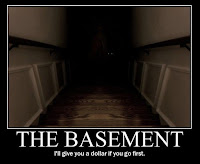 "Hate" might be too strong a word here, but I have a difficult time seeing the appeal of gaming in someone's - anyone's - home. Before everybody goes bonkers over this, lemme explain.

In an earlier post, I reminisced about different gaming clubs of my youth. One important fact about all of them was that they were in public places - a student union at university, and a police station community room. Since that time, I've spent a lot of time gaming in people's homes, and with one notable exception, they've all struck me as distinct second choices, compared with public spaces as gaming locales. I am pretty sure this is because I see as disadvantages the very things that might appeal to others.

"But we can get together in the comfort of our own home and game as long as we like." While it is true that time and space are nominally more under your control in your own home, the fact of the matter is that this doesn't always work in practice. Homes have to be maintained and kept clean, and while gaming all night long might seem attractive, I rarely see decisions made at 4am that stand the test of next-day thinking (don't get me started on jobs and getting up in the morning). What other people see as freedom I see as heaping responsibility on the person living there.

"We can really focus on the game when we're at home." Really? Most gamers' households are one big distraction when it comes to gaming. Game, book and media collections, just to start with - and then there are other distractions that only arise in your own home: telemarketers, non-gaming roommates or family members, you name it.

There are other reasons, but you get the idea. I think the framework of public spaces used for gaming actually makes gaming better:
In the end, public spaces such as gaming clubs do something else that gaming at home can never do: it makes our hobby more visible. Seeing how much people complain about "the death of gaming" it seems to me that the benefits of having a bright, friendly atmosphere of a game club outweigh the (supposed) advantages of gaming at home. To be sure, game clubs can fall victim to their own organizational faults and foibles, but in the end, I still think they come out on top.
Posted by Victor Raymond at 10:18 PM 3 comments: