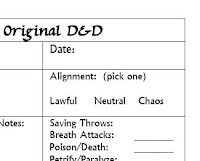 I've got my own 3x5 character sheet for D&D, which can be found here; print on cardstock and then cut to size.
Posted by Victor Raymond at 9:57 AM 7 comments:

I got together with some friends of mine - both of them experienced gamers - as they wanted to talk to me about possibly playing in my new campaign.  We had gotten to a discussion of different styles of play, and what people want to do in a game and what makes a game good.  It was one of those conversations where everybody has a lot to say, and were falling over each other saying them.  But I was brought up short when one of my friends said, with an air of complete certitude, "Well, yes.  Campaigns are supposed to be all about what the players want." (or words close to that)

My eyes apparently narrowed, and I said something close to "Frankly my dear, I don't give a damn."  Well, what I said was a bit more pungent than that, and brought both of my friends up short.  I quickly apologized, as I realized that one of my buttons had been inadvertently pushed by what my friend said. 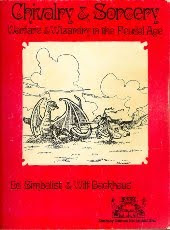 Some background: I had mentioned to my friends that I was open to running several different things: a Classic Traveller game; Original D&D using Labyrinth Lord; a Chivalry & Sorcery game; possibly Tekumel.  My partner, L., has always been interested in history, so I found myself putting together the C&S game, using Columbia Games' excellent Lionheart campaign setting.  I figured I would set up things with a little mystery, a little magic, and maybe some minor changes in history.  This sounded good to L., so I set out to recruit some other players, which is how I found myself in a diner in suburban Madison, somewhat embarrassed for swearing like a sailor.

It's a particular philosophical point: is the game all about the players?  Where do the needs of the referee come in?  It's been my impression based on conversations like this one and others, that there is a strong current in the hobby today that sees the referee as essentially a reactive (and somewhat passive) facilitator for the players and their ego trips.  In particular, I've found myself bemused at the suggestion that a referee doesn't really have any rights to shaping the game setting or rules, unless the players agree - as if they are supposed to start the clockwork on the setting and retreat behind the curtain.  (I blame this mostly on the emergence of computer games and MMORPGs, actually.)

There's two ways in which this philosophy is problematic: it is actually less of a challenge for players to allow them to determine things completely, and it pushes the interests of the referee out of the picture, unless that interest does not conflict with that of the players.  I'll take as stipulated that a game can only work if the players and referee are in collective agreement about the game and the setting, but I think that a referee has a legitimate and real interest in setting the boundaries of the game she wants to run.  To be sure, somebody could run a game nobody is interested in, but that's always possible.  I'm not suggesting that a referee be unresponsive to his or her players, simply that the players' interests should not determine everything.

Which brings me back to my conversation with my friends.  What I determined was a better statement of my belief was: the extent to which a player is interested in my needs as a referee is the extent to which I will be interested in their needs as a player.  Put another way, a game is enjoyable if it facilitates a dynamic between the players and referee such that everybody gets their creative needs met, and this definitely includes the referee.  Does that make sense?
Posted by Victor Raymond at 4:21 PM 11 comments: