So in the latest session, our band of hardy adventurers had gotten split up:


...had all gone through a teleportal that caused them to appear about 20 feet above ground level, near the entrance to the dungeon.  Meanwhile, the rest of the party:


...had all gone through the same teleportal, but using a different command word, were transported deeper into the dungeon.
Group A went back to Kingsbridge, the nearby village, and recruited help.  With two warriors and a bard, they went back into the dungeon in search of their friends.  Going through the teleportal, they were reunited with their comrades, and began to make their way out.
On the way out, they found themselves on the second level of the dungeon.  In a particular portion of said level, they had encountered a guard post manned by hobgoblins.  In previous expeditions, they had tried to take out the hobgoblins, to little effect.  The hobgoblins had initially asked for a toll of a silver piece per party member, but this was refused by stingy player-characters ("what, put money back into the dungeon?  What are you thinking??").  Each expedition had seen an escalation in tactics: caltrops, molotov cocktails, tripwires, combined arms tactics etc. So on their way out, the player-characters decided it would be a good idea to take out the hobgoblins once and for all - BUT!  The doors leading to the guard post had been spiked shut, leaving one long corridor leading to the actual guard room.
As the player-characters peered cautiously around the corner to see what was there, I told them, "it's hard to see all the way to the guardroom, as the corridor has been keep purposely dark - there are some darker shapes in the shadows though, and something is clearly moving.  All you can hear from down the corridor is an ominous krick-krick-krick-KRICK sound (not unlike the pawl on a rachet).  Oh, and right there, hanging on the wall around the corner is a wooden plaque."
The players, being properly curious, asked, "what does the plaque say?"
So I handed them this: 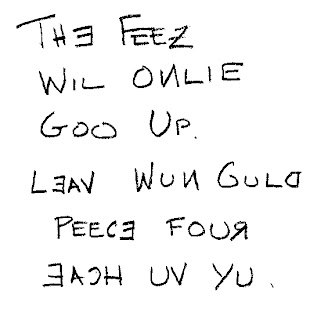