The Other "Three Little Booklets" 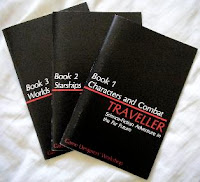 I started playing Traveller back in 1977. I had been role-playing for a couple of years at that point, and I remember gamers coming back from Origins with a new game they were all very excited about. Within a couple of months the black box with the above text, containing three digest-sized booklets, had arrived and we all started setting up our Traveller universes.

That last bit is rather important.

The booklet titles and organization were an homage to Original D&D: Characters & Combat, Starships, and Worlds & Adventure. A fairly quick read of the rules showed science fiction influences including Poul Anderson, Jack Vance, Jerry Pournelle and Larry Niven, E.C. Tubb, Isaac Asimov and H. Beam Piper. Aside from the cover quote, and a bit of detail about the example character, Merchant Captain Alexander Lascelles Jameson, there's little if any background inherent in the original game.

So it was up to the referee to come up with their background and setting for adventure, and it was nearly two years before GDW began providing their own "official setting" for Traveller - the Third Imperium. In that span of time, there were a lot of campaigns developed, and they reflected a wide range of imagination, much like the original D&D campaigns started c. 1974. What makes this all interesting yet today is that - like Original D&D - Classic Traveller represents a much larger range of gaming possibilities than the GDW in-house campaign that eventually became synonymous with these "three little black booklets."

"Traveller Tuesdays": Over the next several Tuesdays, I'm going to critically review Classic Traveller as another exemplar of this thing we call "old school gaming" and how it is still relevant to gamers today. I'm also going to talk about some of the early campaigns I played in, and show just how different early Traveller gaming really was, compared to what has come along since.
Posted by Victor Raymond at 7:38 AM