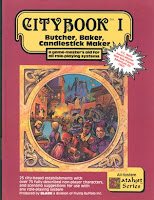 If dungeons are the beginning point of adventure, towns and cities are at the end. After all, adventurers needs someplace to go to rest and recuperate, get magic items identified, and spend all that loot they've accumulated from their perilous journeys into the unknown, right? Recognizing this, the earliest D&D campaigns - Blackmoor and Greyhawk - were not only named for their dungeons but also for their nearby towns and cities.

However, there is little guidance in Original D&D for how to put together a town or a city; I suspect Dave and Gary assumed that was the easy part of running a campaign. I certainly like coming up with stuff for cities and towns, but that's not necessarily true for everybody. Recognizing this, Flying Buffalo, Inc. produced Citybook I as part of their Catalyst series of all-system supplements, and published in 1982.

Citybook I: Butcher, Baker, Candlestick Maker "...is not a complete city....while the establishments are described in detail, the choice of business included are those a group of adventurers is most likely to have an immediate interest in." Basically, a referee can use the 25 establishments and their various NPCs in whatever way they want. While you could use the book as the framework for an entire city (which would be up to you as the referee to detail completely), it's more likely you would pick and choose what you wanted to include in your campaign. That's certainly what I did for my Southlands campaign, placing two Citybook businesses in Westguard town:

It was actually tempting to add more.

Each one of the establishments in Citybook I is well-detailed but not so much so that a referee can't add their own material. The lack of specific system information makes it easy for a referee to take the relatively abstract descriptions of fighting and magical ability and specify them using the rules of their choice. The book itself is divided into an introductory section, with guidelines for the referee, an article on "City Mastering and Citybuilding," an explanation and key for all maps, and more ideas for referees. Following this, there are:

...and the storylines and characters included for each of these have suggestions for connecting them to other establishments detailed in the book. The artwork and maps including with all of this are excellent - the maps are nicely detailed, and the artwork is evocative inkwork in black and white. Many of the character portraits are by Liz Danforth, whose distinctive and attractive style can be found in everything from Tunnels & Trolls to Challenge magazine articles for Twilight: 2000 to, well, here.

As you can probably tell, I really like Citybook I. Each establishment is detailed enough to be used "as is" but written to allow for individual modification and further creativity, and presented in an attractive format. If I had a criticism of Citybook I it would be that the backgrounds for each establishment are sufficiently interesting to become a distraction from a dungeon as the focus for player-character attention. But if that's what's wrong with this book...well, that's hardly a criticism.

Rating: five dragons out of five.
Posted by Victor Raymond at 7:38 AM