The Book of Weird 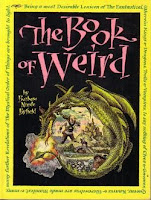 "Trudge: the slow, weary, yet determined walk of someone who has no alternative but to continue."

This whimsical definition is from Barbara Byfield's The Book of Weird - "being a most desirable lexicon of the fantastical" and therefore of interest to gamers. I ran across a copy when I was a teenager, and found myself taken with the gently satirical and slightly otherworldly tone of this book. Published just over 40 years ago as The Glass Harmonica, it has been in and out of print several times since then.

It's hard to describe the utility of this book. Coming at it four decades later, it would be relatively easy but incorrect to call it a precursor to Diane Wynne Jones' The Tough Guide to Fantasyland. Pulling definitions out - particularly the short ones such as the one given above - are tantalizing tastes of the gestalt found within the pages of the book. For myself, the subject of the book hearkens back to another favorite of mine, Hope Mirrlees' Lud-in-the-Mist, but only somewhat. It provides a strong sense of how familiar and yet how strange various elements of fantasy really are, especially in this kind of iconic imagining through the act of definition. You can find out about the differences between churls, oafs, and fools; what an arras is useful for; beaux and their sartorial elegance; and what to do when you have been imprisoned and walled up with a cask of amontillado - and that's just a start.

For old school D&D players, the light and deft touch of this book can be overwhelmed by the usual round of boisterous play, so a referee should be cautious about using The Book of Weird directly in their campaign; it is much better as a background reference (of the sort that should have players waking up in the middle of the night wondering, "now what did he mean by that?"). Over time, I found its best use as one of several touchstone sources of whimsical imagination - so did Garth Nix, interestingly enough - and I suspect you might, too, if you were to get a copy.
Posted by Victor Raymond at 1:26 AM