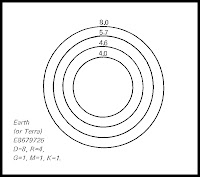 Tech levels in Classic Traveller have always been a subject of debate.  Back in 1977, what was interesting was seeing the range of tech levels, and what they meant.  Because of the relatively "gritty" feel of the original game - firearms and cutlasses on the ground, lasers and missiles in space - there was a lot of room for experimentation and creativity in the higher tech levels.  It was clear to most of us that Traveller was not a game for Star Trek simulation, since matter transport and anti-matter were "off the chart", essentially - TL 16 and 17, respectively.  However, that left a lot of room for referees to work in, and I recall people taking advantage of that.  But the play of the game tended to revolve around more easily grasped tech levels; TL 12 and under, mostly.

What emerged from re-reading the 1977 edition of the rules is shown above.  It shows the one example planet in the entire game: Earth.  Earth has an E class starport, 8000 miles in diameter, a clean standard atmosphere, 70% hydrographics, roughly a billion inhabitants, a balkanized government structure, a law level of two - and a tech level of five.  Now maybe that's a typo; in the 1981 edition, the tech level is eight, so perhaps this is just off.  However, what this suggests is that, overall, Earth's technological capabilities are not simply the highest level possible, but more what can be commonly produced.  (Remember, this is all conjecture.) What does TL 5 represent? Firearms for personal weapons, cloth armor, sandcasters and mortars (but not rockets), the very earliest computers, radio and television, ground cars, fixed wing aircraft, and oil as a major fuel.  Roughly 1940's level of technology - which is okay, if you accept that this was a planet-wide average - and that the entire system of tech levels itself was at best an approximation.


Needless to say, getting the highest quality high tech stuff was important - but the scale of tech levels themselves made game play more interesting, as we tried finding the "sweet spot" between different tech levels, available gear and trade goods, and how to take advantage of that, whether trading or raiding.  What I recall most clearly was that most "star empires" operated around tech level 12 or so - that being seen as the "upper edge" of what was easily developed.  There were a lot of star systems with much lower tech levels, making them interesting places to visit (and potentially sign up for lucrative trading deals, or consider for raiding purposes).  Since books like Space Viking and The Mote in God's Eye and Trader to the Stars were our inspiration, we were all trying the tramp freighter route, trying to get enough credits to buy a Type C mercenary cruiser, and then go raid planets for their wealth.


I recall quite distinctly rolling up a character who was a Navy Admiral, who then got several boosts to his social standing as he mustered out.  I presented this character to my friend Rick, who was running a Traveller campaign - could this fellow be a planetary ruler?  Rick grudgingly allowed this; my admiral ended up with a planet with a relatively lower tech level - 7 or 8, if I recall correctly.  There was some discussion of what the admiral's planetary government could build up, without me having a really good grasp of what was possible.  It ended somewhat abruptly with the arrival of pirates/Space Vikings of a sort, and the discovery that I had made some poor decisions as the planetary ruler, building trading ships without having planetary defenses.  In the end, the lower tech level of the planet made it difficult if not impossible to actually get what I wanted - rather unfortunate to the teenager I was back then!  I've often wondered what it would be like to play this scenario out again, knowing what I know now.  With a Classic Traveller revival, that might be possible - I can only hope!