GaryCon IV was a blast! 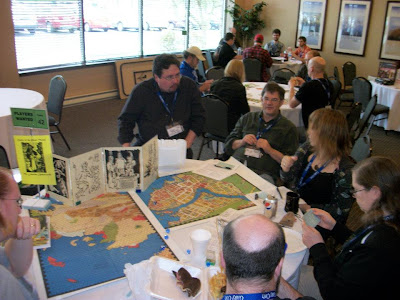 Downside of this past weekend: I had been unsure if I was going to make it to GaryCon, so I had not registered to run any events.

When I arrived at GaryCon on Thursday, I brought along a whole bunch of material: Empire of the Petal Throne, Classic Traveller, Mutant Future, and Labyrinth Lord.  The only game I ran was the very first one.  Planning for the MAR Barker Memorial occupied a decent part of Friday, but eventually everything got resolved.  By Friday evening, I had gathered a number of players in the Open Gaming Area, and we started to adventure in Old Jakalla.  Over the course of the convention, I ended up running EPT for about 20 hours.  Some highlights included:


Next stop: North Texas RPG Con.  Looking forward to it!

Posted by Victor Raymond at 9:21 PM