Twenty-two.  That was the number we had for the last Madison Traditional Gaming meetup, running from 10am to 5pm, on Saturday April 16th.  Generally speaking, we've averaged somewhere between 8-15 people at previous meetups, but this time things seemed to work just right.  One of the players in my Tuesday night D&D campaign, Nix, ran a game of Brave New World, James K. ran Labyrinth Lord, while I ran a game of Empire of the Petal Throne. 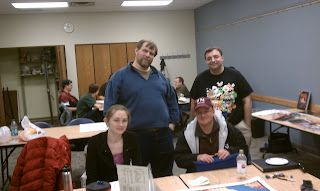 I started Madison Traditional Gaming just over a year-and-a-half ago, meeting once a month primarily at public library branches around Madison.  We met twice at UW's Memorial Union, but the combination of expensive parking on-campus and difficulty securing a regular location resulted in a return to library meeting rooms.  I've been using Meetup.com and Facebook as the primary means of letting people know what's scheduled, and that has worked out quite well.  Once a month is great for one-shot adventures, but not really suited to on-going campaigns. 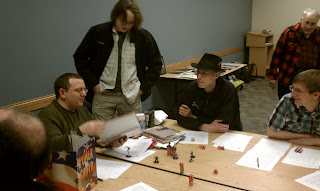 We were fairly lucky in getting a sizable contingent up from UW-Platteville's Platteville Gaming Association, the good people who put on Plattecon very year.  Erin U., the chair of the most recent Plattecon, was able to persuade a bunch of them to come up for the meetup, which was just amazing.  I am hoping to arrange for a full track of role-playing events for next year's Plattecon, and between now and then recruit some more referees to run Old School RPG campaigns around Madison and Wisconsin. 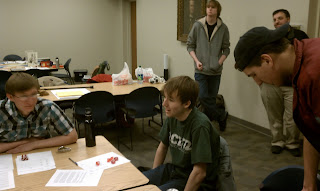 Many thanks to Mark S. from the Milwaukee Traditional Gaming meetup, Clint P. and everybody else who showed up and played games.  I really think we have something good going on here.
Posted by Victor Raymond at 6:24 PM